Sports Illustrated for Women magazine named Jackie the Greatest Female Athlete of the 20th Century. Jackie dominated the track and field circuit for 16 years and won three gold, one silver and two bronze medals spanning four Olympic Games. In addition, she won a total of four gold medals at three different World Championships. Jackie received the Jesse Owens Award in both 1986 and 1987. She still holds the world record in the heptathlon (7291 points) and is the American record holder in both the heptathlon and long jump (24-7). On December 3, 2004, she was inducted into the U.S. Track and Field Hall of Fame. Jackie attended college at UCLA and starred in both track & field and women’s basketball from 1980-to-1985, eventually playing professional basketball.

The inaugural recipient of the Humanitarian Athlete of the Year, Joyner-Kersee is known worldwide for her interest in aiding others. She has helped to build the Jackie Joyner-Kersee Youth Center Foundation in her hometown of East St. Louis, IL that has raised more than $12 million.

In 2007, Jackie along with several notable athletes including 2010 Coach Wooden Citizenship Cup recipient Mia Hamm, founded Athletes for Hope, a charitable organization of professional athletes who get involved in charitable causes and inspire millions of non-athletes to volunteer and support their community. Jackie has recently embarked upon a nationwide effort to enhance the comprehensive health of our nation’s communities through the promotion of healthy lifestyles.  She has been asked by the United States Department of Agriculture to promote My Plate, the replacement for the food pyramid.

Jackie was selected as the recipient of the 2011 Dick Enberg Award.  The Award is presented annually to a person whose actions and commitment have furthered the meaning and reach of the Academic All-America® Teams Program, promoting the values of education and athletics.

Jackie is the author of both A Kind of Grace (1997), her autobiography, and A Woman’s Place is Everywhere (1994). She is married to famed track and field coach Bobby Kersee. 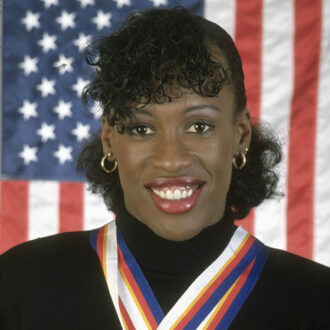